Missouri dominated the 17U age groups, with both champions being from Missouri! 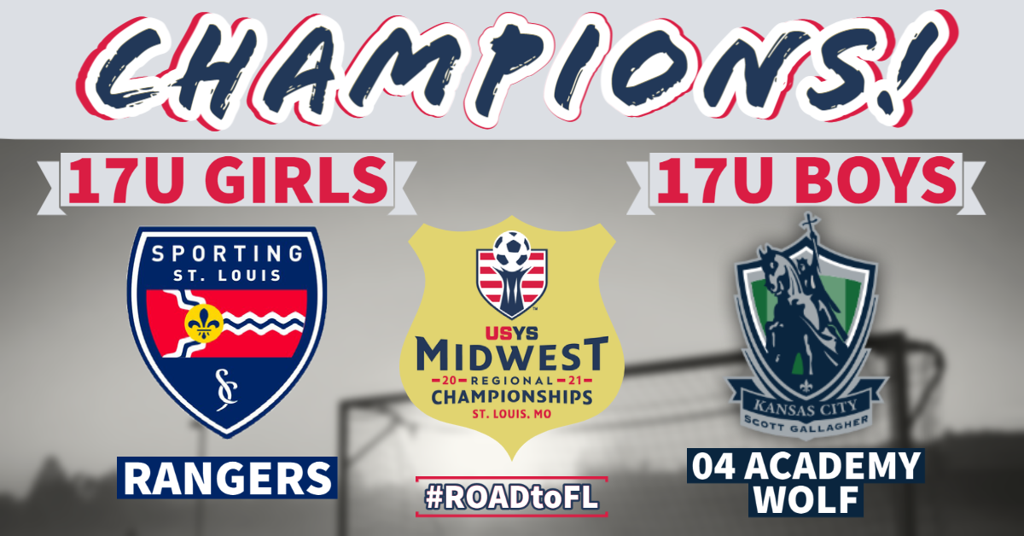 After six days of constant weather delays, fantastic soccer played by the best teams in the Midwest, and a lot of tired legs, three Missouri soccer teams are now headed to the USYS National Championships in July. Two of these three Missouri teams were named the 2021 Midwest Regional Champions. This National event will take place in Sarasota, Florida from July 19th-July 25th.

In the first game of the day, the U17 Sporting STL Rangers faced off against Kansas Rush Academy (KS). For 89 minutes the game was scoreless, and most spectators expected to go into overtime. As the rain came down in the 90th minute of the game, a Sporting player took a corner kick and placed it perfectly by the penalty kick spot. Ayanna Clarke headed the ball off the kick and placed it in the left corner of the net. After this goal, some amazing work from the defense, and great saves from the Rangers goalkeeper, the Sporting STL Rangers clinched the Regional title and will be on the road to Florida for the USYS National Championships!

The U17 Boys Kansas City Scott Gallagher 04 Academy Wolf faced off against the Ohio South State Champions, Cincinnati United Gold. KCSG played a very fast-paced game and had creative ball movement. Before the end of halftime, KCSG was up 1-0. In the second half, KCSG scored again, and Ohio South came back with a goal, making the score 2-1. Late in the second half, KCSG scored again. The final score was 3-1. KCSG Academy Wolf, who came into this tournament after a wildcard pick, will now be headed to Nationals in Florida.

In the last game of the day, U20 St. Louis Scott Gallagher 2002 Elite played against the State Champions of Illinois, Chicago FC United Pre- Academy. This game was filled with action and many goal opportunities. Late in the second half, SLSG was trailing 0-2. Within six minutes, SLSG scored two goals sending them into overtime. Chicago FC scored in the first overtime. SLSG dominated in the last overtime and even had their goalie in some of their offensive plays but could not find the back of the net and lost 2-3. However, SLSG Elite will still be heading to Florida due to winning their division in the National League.