A new initiative to remind fans, coaches, and players that referees are to be respected and unsportsmanlike behavior is unacceptable. 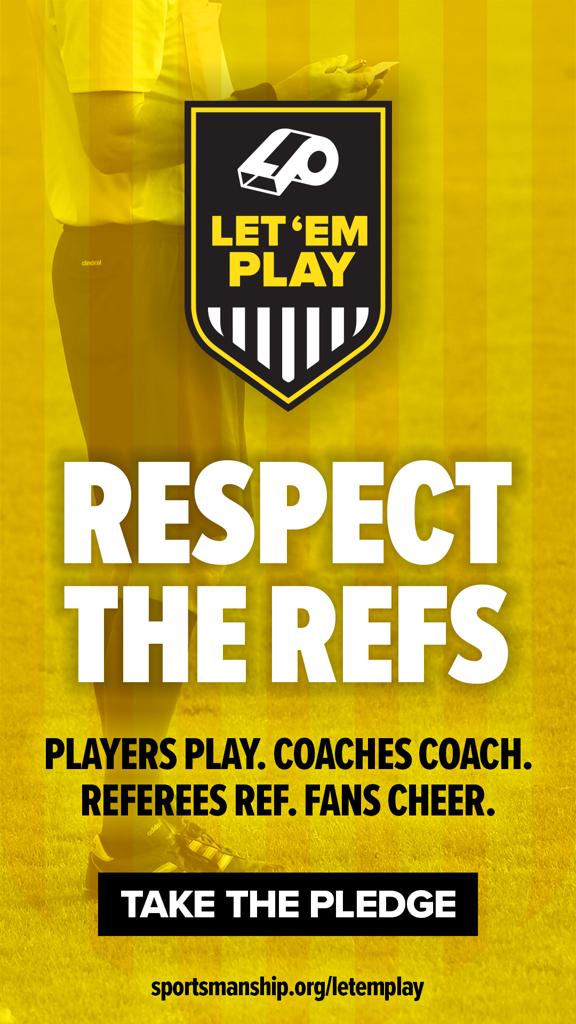 The St. Louis Sports Commission announces the launch of a new initiative called Let ‘em Play designed to reverse disturbing trends of referee abuse that have led to a severe shortage of referees in youth sports.  The program is aimed at reminding youth sports parents, coaches, fans, and players that referees are to be respected and unsportsmanlike behavior toward officials is unacceptable.  With the support of the St. Louis Youth Soccer Association (SLYSA), the Let ‘em Play program is underway at soccer venues throughout the St. Louis region and several youth soccer clubs were quick to jump on board.  “Respect the Refs” is the primary refrain seen on banners at soccer venues, combined with an online presence and social media engagement to show support for referees and reinforce the message that referees are essential for kids to enjoy the benefits of playing a sport.

“Having been a soccer parent, coach, and volunteer youth club administrator for over 20 years, the challenges of the game atmosphere for soccer referees have escalated to the point where we simply don’t have enough referees for kids to play,” said St. Louis Sports Commission Vice President Chris Roseman.  “The Let ‘em Play program will have a positive impact on civility at the games with the intention of keeping referees on the field and improving the game experience for all.”

According to a study by the National Federation of Sports Officials, 80% of new referees quit within two years due to rude or abusive parents and coaches. Of the 17,000 referees surveyed in the study, 75% cited rude or abusive behavior from parents and coaches as the reason they quit officiating.  The referee shortage is so severe that games and tournaments have been limited or canceled due to a lack of referees to officiate games.

Aside from enforcing the rules of the game, referees in youth sports are responsible for player safety during games, including protection from rough play, spotting possible concussions, and managing severe weather situations.  The goal of the Let ‘em Play initiative is to create and promote an environment at youth sporting events that attracts and retains referees.

“The Let ‘em Play program provides a constant reminder to parents and coaches that referees are human beings doing their best, and even if they make a mistake, they do not deserve abuse and vitriol,” said Johann Arnason, executive director of SLYSA.  “Respecting and supporting referees is critically important to the health of our game – if there is no referee, there is no game.”